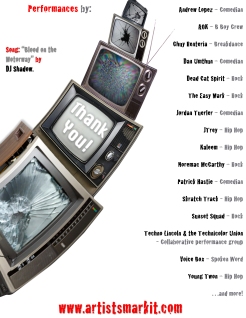 May 27th and 28th, 2011 – Group Exhibition / Solo Installation, “Introduction To Space / The Other Side of the Tracks” – 8 artists, 4 rooms, 2 nights, all under 1 roof – The Internet Players Studio at Hibernian Hall in downtown Davenport. It is the oldest building in Davenport where the infamous Bix Beiderbecke held his first public performance. Featuring artists: Gary White, Liz Davenport, Tom Awad, Tom Taylor, Kelsey Nagel, Lauren Nigri, Nathan Porteshawver, and “Yours Truly”!

A video of my room from opening night!

Photos from the show: (music: “Abstract Reality” from ‘Cunninlynguists album “Piece of Strange”)

A tour of Tom Awad‘s side of the show: 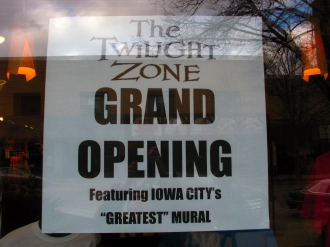 The ‘InZone’ window poster (top left) and some attending friends at the grand opening of the “Twilight Zone” mural by Megnetic Joy Ostermann y Yo. (See the video!)

The footage (above) was taken by my Mom <3 at the “Soul Swollen” Art Show held in the University of Iowa’s ‘Eve Drewelowe’ MFA Graduate gallery in Iowa City just before Thanksgiving 2008. Featuring the ceramics of Nick Eldredge and paintings by yours truly. The flyer (left) was designed by life-long friend and cartoonist Maggie Lanphere.

My wife (at the time – girlfriend) Meghan worked overtime helping me frame my work which made it look professional. One of my best friends Tom Awad told me, “She must really love you”! Meghan’s soul is swollen also. This show made us grow closer. 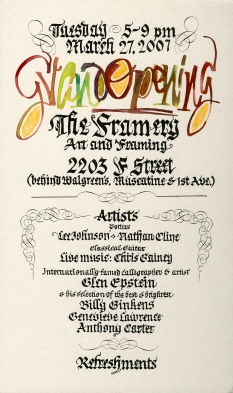 Glen Epstein (above) was the first teacher I ever had that truly appreciated and respected graffiti artists. He would always say: “You don’t need to go to a museum to see a masterpiece, you might have just stepped in one”. He came over to my apartment one evening while I just so happened to be painting my friend Bryan Wagschal who just so happened to be “T-Rex’d” as we say. Glen loved the whole scene taking place and told us about all his crazy art binges. Besides my parents, he was the teacher that saw something in me and helped me to see it too; telling me not to rely on talent, but to work harder and smarter. He gave me a real push, and I’ve been goin ever since. If I live past 40 I will probably start to look like him. Godspeed Glen.

This work is licensed under a Creative Commons Attribution-NonCommercial-ShareAlike 3.0 Unported License.